Parents expect their children to be safe when they are in the hospital and it is not acceptable for hospitalised children to fall.

However, the truth is they sometimes do fall: either accidentally dropped by staff or by their parents, or they slip, trip and fall from their beds, chairs, and examination tables.

Patient falls are considered a nursing quality indicator that can be used to benchmark and compare hospitals. It is important for nurses to take the lead in helping to prevent falls and keep children safe.

In a paediatric department in a hospital providing emergency, secondary, and tertiary care to all citizens and residents of Bahrain, the high rate of falls incidents among hospitalised paediatric patients created an urgent need to introduce an appropriate and valid Paediatric Fall Risk Assessment Scale. The hospital has 1,200 beds, 600 physicians and a large number of transient staff. The facility is attended by a mixture of Bahraini, Arab, Asian and Western patients, which make it a real multicultural environment.

The Humpty Dumpty Fall scale (HDFS) was introduced to assess the risk of falls among paediatric inpatients to give more attention to the issue and introduce preventive measures.

The first step was to train staff nurses about the use of the HDFS assessment and the importance of conducting it as a vital step to prevent their patient from falling.

The HDFS was distributed and uploaded as a software document on all the computers in each unit of the paediatric department. Staff nurses were asked to conduct this assessment as part of patient admission procedure, and they are required to reassess them when there is any change in their health status.

Nurses were asked to document the level of risk obtained from the assessment and record it in the nursing notes. Children with a high level of risk of falls were identified by a “Humpty Dumpty” picture on their hospital bed and in their patient notes. Staff nurses are then required to follow all the protective measures mentioned in fall protocol throughout the patients’ admission to hospital.

Staff compliance was high, and an audit of the tool showed a reduction in the number of falls in the paediatric department.

This development is strongly aligned with the organisational health improvement strategic goal of maximising patient safety, promoting a culture of quality assurance and saving the cost of prolonged hospitalisation and treatment of complications that result from inpatients falls. 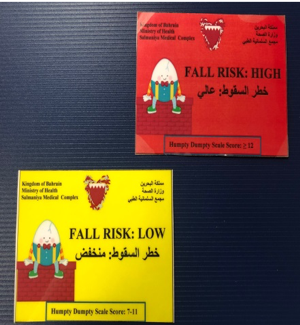