The nurses changing lives in their communities

Nurses can often be a person’s first, or sometimes only, healthcare contact. But Covid-19 made the job of nursing much harder. How did they continue to help vulnerable patients while responding to a public health crisis?

In an emergency, nurses must be ready to take charge and spring into action. “I distinctly remember one night working in Charleston, South Carolina a number of years ago, getting a call saying that the power had gone out in our main hospital,” says Pamela Cipriano, president of the International Council of Nurses. The backup generator had kicked in and then failed, so some essential systems were offline – telephones had stopped working along with elevators and power for essential equipment like ventilators. Patients, including babies on the neonatal ward, who needed breathing assistance had to be ventilated manually or moved to another part of the hospital that had power.

“It was a true disaster situation,” says Cipriano, who had to think on her feet. The nurses ran extension cords from areas that had power to the patients, or moved them to other parts of the hospital. At that moment she thought “what do we need to do to keep everyone safe? How do we [plan for] what's going to happen in the next 15 minutes, 30 minutes, 60 minutes?”

While unusual, this sort of event wasn’t unheard of in Charleston – Cipriano experienced four hurricanes in her time there. “Many nurses there who had lived through Hurricane Hugo in 1989, which at the time was one of the most powerful hurricanes to hit the southeast United States, and who had to rescue babies when windows in the neonatal intensive care unit were blown out by deadly winds, actually suffered from post traumatic stress disorder for years afterwards,” she says. “I mean, it would trigger severe stress for anyone if they had worked through that event.” When anticipating a storm, staff would be asked to arrive at work with three days’ personal supply of water and fresh clothes, should they be locked down in the hospital. The constant pressure was telling.

Coping with crises is part of the job for every nurse. When Covid-19 emerged, while it presented new challenges, the mentality of being adaptable and resourceful was already there, says Cipriano. From emergency rooms to rural communities nurses continued to serve their patients through the uncertainty and without a full understanding of the transmission of Sars-CoV-2. 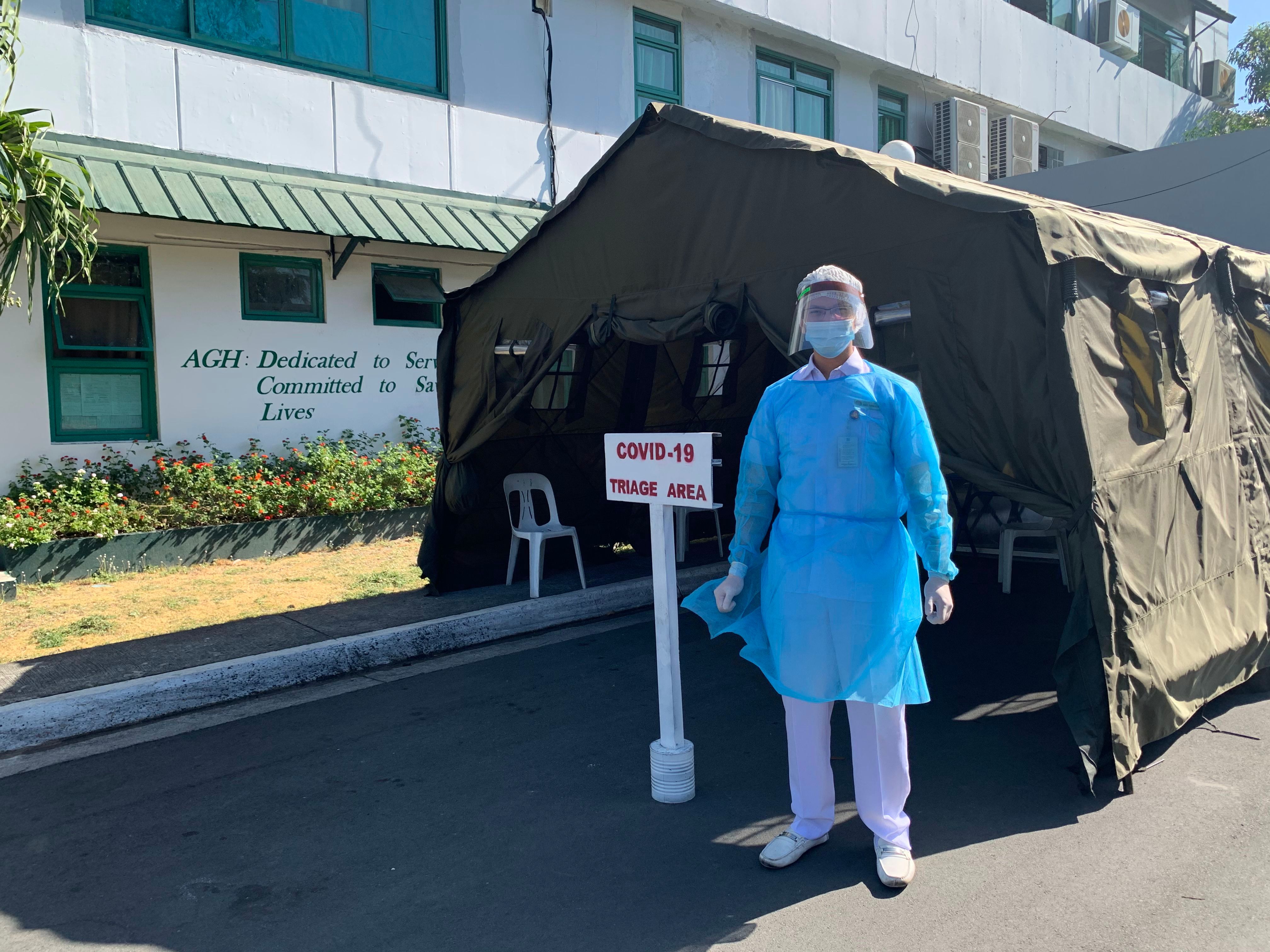 Going above and beyond

Danilo C Pamonag Jr has been an emergency room nurse at Army General Hospital in the Philippines for more than five years. He still vividly remembers the start of the pandemic in January 2020. “We had a scarcity of personal protective equipment (PPE), especially face masks,” he says. A lack of PPE was a big problem at this bustling hospital, and for the Philippines in general. Initially, Pamonag had to be resourceful and use homemade masks made from sponges that were cut up and held in place with elastic, which while not ideal were better than no protection.

But Pamonag knew that more could be done and was determined to do his part. He donated some of his salary and spearheaded fundraising to help other local hospitals who had an insufficient supply of PPEs. He distributed PPEs to seven different hospitals, including the Lung Center of the Philippines, which was in dire need at that time.

Now, he says the pandemic is easing and there is a return to a more normal working pattern, but the can-do mentality that he and his colleagues showed has stayed with them. While his personal contribution has drawn plaudits, he smiles at the suggestion he is deserving of them and praises his colleagues actions too. 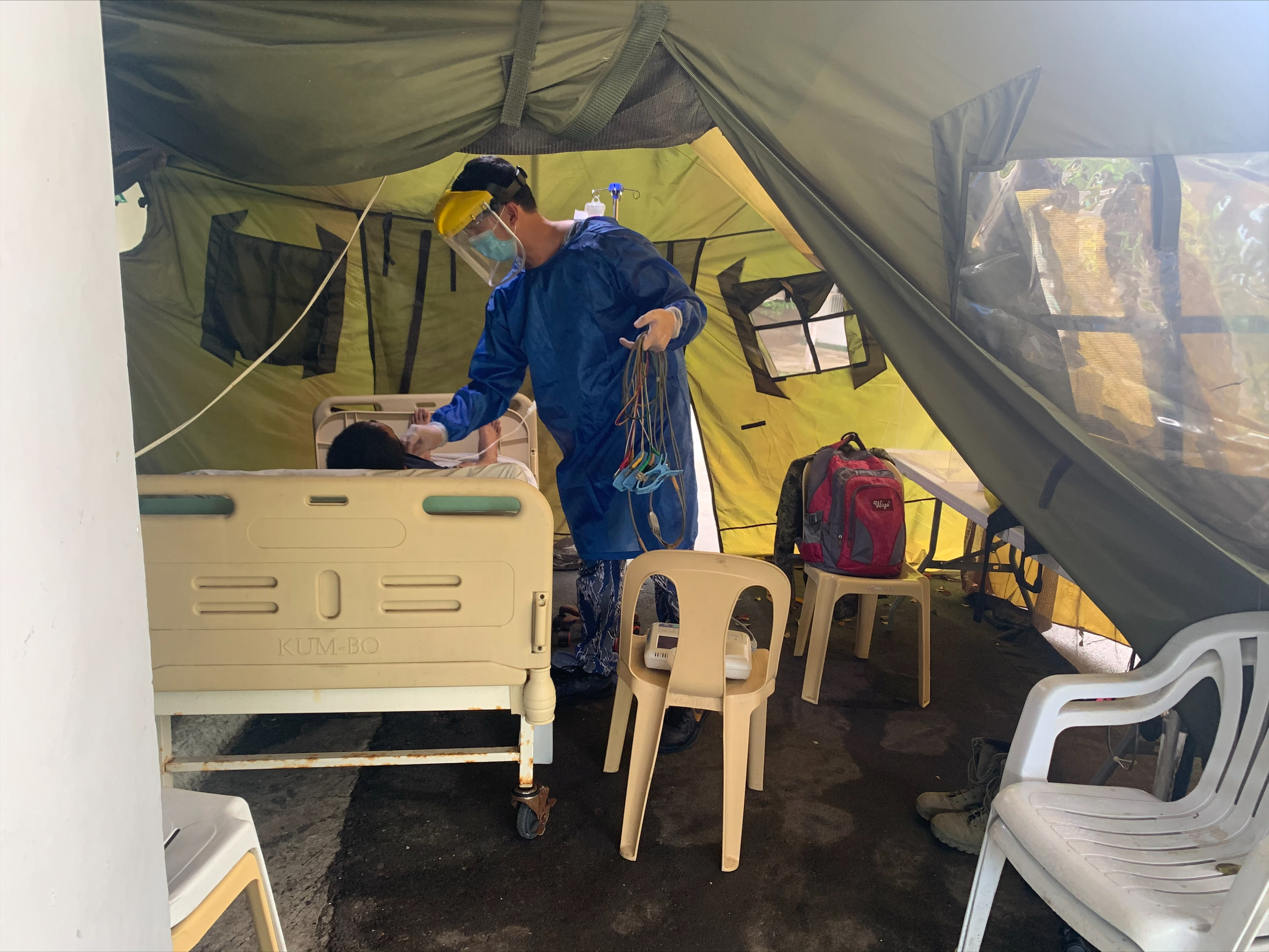 While Pamonag says he was motivated by teamwork, sometimes individual nurses can have a big impact on their communities.

Patience Shipalane is a community nurse in George, a municipality in Western Cape, South Africa. Her day-to-day involves visiting creches, schools, workplaces, universities and homes to educate people in basic hygiene and health. Diarrhoea, for example, spreads quickly through these communities and vitamin A and D deficiencies are common. In George, these can be life-threatening.

In informal settlements people share taps and toilets, and might handle food from street sellers without washing their hands, so an infectious disease can spread rapidly through the population. “Imagine the queue, how it's going to be while everybody's rushing for the toilet,” says Shipalane.

Her community is affected by poverty, crime, poor quality of life and other social challenges such as child neglect. While visiting homes, Shipalane is also able to look out for signs of neglect. “And once we see that, we involve the environmental health practitioners, audiologists, speech therapists, even the South African Police Services – we are not working alone,” she says. Nurses rarely take credit for the talents they bring to connect their keen observations with acquiring and coordinating services to meet the needs of people.

Shipalane takes it upon herself to personally book appointments for children, calling parents, and following up with them at home. She has touched so many lives that she is often approached for advice by people she doesn’t recognise.

“They feel comfortable because I understand them, even if they don't understand English. I've got the ear, you know.” Shipalane speaks Xitsonga as her original language from the Limpopo Province, and other local languages like, Isixhosa, isiZulu and Afrikaans. Because they know she is approachable, locals sometimes report suspicions of neglect.

But her help is not always accepted and sometimes can result in confrontations. Shipalane gives one example of a mother who was “a little bit aggressive”. Likewise, Pamong says that patients in the emergency department can also be intimidating. “It really takes a lot of patience, because some of our patients can be irate because they don't feel well,” he says. “So we have to calm ourselves even though they are angry at us.”

Shipalane says she doesn’t worry about hostility, all she cares about is the child. In the particular case she mentioned “there was a need, because that house was a small, small, small informal house. You could see the [lack of] hygiene.” But she was able to earn their trust through persistence.

“When I wake up, I say I just want to make a difference to one child in the community,” she says.

A foundation of trust

Cipriano says she often sees that nurses feel compelled to help people from their own personal resources when they feel like someone has been let down elsewhere, adding that it is not in the job description. “It may not sound like a big challenge, but it truly is because there's not only emotional investment, but intellectual investment,” she says. Nurses are inherent problem solvers however sometimes the magnitude of social and economic issues exceeds what a nurse can do to help.

That emotional investment comes from building up a rapport with a patient, adds Cipriano. And rapport can be built in unusual ways. Richard Newman is a nurse practitioner, providing health services to those in the criminal justice system in Australia. The criminal justice population is very vulnerable, with limited access to healthcare and sometimes very low levels of health literacy, so Newman has learnt to listen deeply to his patients – a practice known as dadirri to First Nation people. “Some of my patients have multiple and very complex comorbidities,” says Newman. “So I spend time sitting with them, analysing and working out the disease progression, and maybe coordinating care with various specialists.”

Newman sometimes discovers health conditions that his patients might not have been aware of. But explaining their status can be challenging – this might be their first contact with formalised healthcare. He gives one recent example of an inmate who had been secretly throwing away medication because he thought he could treat his disease without medical intervention. This only came to light after Newman listened deeply to the inmate’s beliefs that he could beat his illness on his own.

“A lot of patients have a mistrust of the government based on long standing intergenerational trauma,” says Newman, explaining why some prisoners might be reluctant to engage with him. “They also might have been on the receiving end of being let down by those who say they want to help. I was only speaking today with [colleagues] about the value of credibility and how easy it is to lose and how hard it is to gain. And within our setting, one of the biggest things is credibility with our patients, building rapport and building trust.”

Newman gives the example of making realistic promises to patients. In the custodial setting, appointments and treatments can change depending on events in the prison. Safety is rightly the top priority, he says, but it means he might be forced to cancel appointments as cell blocks or whole prisons go into lockdown. “[If a prisoner is in lockdown] I have to work out if their condition is important enough that I need to see them, or can they wait?” Those unpredictable lockdowns were made more complicated during the pandemic by quarantining rules, as prisoners had to isolate if they were moved in or out of buildings.

Newman says that the prison environment is well set up to control the spread of infectious diseases – as outbreaks of viruses like norovirus are not uncommon – but it is not always conducive to seeing patients quickly.

The safety of nurses in all settings is paramount, adds Cipriano, addressing the challenges that still remain for improving nurses’ working conditions. “And that includes everything from adequate staffing, which is a really critical foundation, to appropriate pay, making sure that we're addressing any kind of emotional stress, mental health and keeping them safe from the standpoint of not having any violence in the workplace.”

“We're very concerned that there is already a projected shortfall of about 6 million nurses, which could grow to 13 million over the next eight years,” she says. “We know that many nurses have temporarily – and we hope not permanently – stepped away because of the stresses of the pandemic and other effects. We have to recognise we are at risk of losing a lot of the wisdom that's in our workforce.”

While there are slightly more male nurses like Pamonag and Newman working in the profession now, they are still very much in the minority. Cipriano says that gender equity will be essential to retaining nurses as women make up around 80-90% of the workforce in some countries, but are underrepresented in senior roles. But she is hopeful that she will be able to address this issue and is optimistic that the nurses we have will continue to provide excellent care.

“Nurses are not only very smart, skilled, flexible, and resourceful, they're also incredibly kind, generous and compassionate and undeterred from doing the right thing,” she says. “And that really plays out not just because of the job they have, but because of their dedication to the people they serve.”

During the pandemic, this resilient profession was overburdened and undervalued. Not for the first time, nurses were asked to go above and beyond the call of duty. Cipriano says that through their dedication and commitment to their patients, as these stories testify in often very difficult situations, nurses have earned the respect of all of us.