Nurses: Heroes of the Beirut Disaster

The President of the Order of Nurses in Lebanon talks about the tragic explosion, how nurses came out in full force to care for the injured and dying, and the importance of supporting and investing in nurses


Dr Myrna Doumit, President of Order of Nurses in Lebanon, spoke to journalists accredited to the United Nations from around the world at a press conference in Geneva organised by the International Council of Nurses (ICN) on 7 August, just 4 days after a massive explosion in Beirut killed over 150 people and injured thousands.

Before this catastrophe, Lebanese nurses were already facing a difficult situation, Dr Doumit reported. 2020 - the International Year of the Nurse and the Midwife – began with a severe financial crisis in Lebanon which meant many nurses were working without pay; in unsafe working environments; being asked to work for half salaries and taking unpaid vacations. Then came COVID-19, which put nurses under great pressure. In fact, after many discussions and meetings with the government, the nurses of Lebanon, with the support of the physicians and other health professionals, had planned – for the first time in their history – to hold a strike in order to fight for their rights.

And then, on 3 August, the dockside explosion happened. All the nurses in Lebanon came out in full force to help; those who were on duty remained on duty, those not on duty came to the hospitals, and those who were far away from Beirut donated blood.

Three hospitals were completely destroyed, and patients had to be evacuated. “Many wounded people were running to these hospitals to seek care not knowing they had been destroyed. Can you imagine the situation?” said Dr Doumit.

Unfortunately, five nurses lost their lives in the disaster while on duty. Four nurses died immediately when the explosion hit the hospital where they were working and the fifth, in a distant hospital, was pushed against the wall by the pressure of the blast, and also passed away. Many others were seriously injured.

"I was on the ground on Wednesday early morning and I went to every hospital. I even went to the hospitals in the suburbs to see where the injured nurses were, but in every street in Beirut city you have the feeling that the bomb was there. We’ve never seen such a thing in forty years of war. I was born during the war; I grew up; I went to school, university; I got married and had my children and every year we have a small war or big war, but I have never seen such a thing - as if in every home there was a bomb.”

Despite this, even those nurses who had been injured in the blast, kept working. They helped to evacuate patients and continued to care for them. Dr Doumit told the story of one nurse, Pamela, who had made the headlines for rescuing three new-born babies. She had been knocked unconscious by the blast and when she came to, she found herself in a different room. She quickly assessed the situation and ran to the incubator where the three babies were. She took them up in her arms and ran out of the hospital. The new-borns were taken to another hospital. “Nurses do not think of themselves,” Dr Doumit, explained. “They think of their patients. They are reactive and move to save their patients.”

When the Saint George Hospital was destroyed by the explosion, one woman, Emanuelle, was giving birth. The electricity was cut by the blast, but the health professionals continued to deliver the baby using the light of a mobile phone. As soon as the baby, George, was born, they wrapped him up and quickly evacuated him and his mother to safety. See the BBC video on YouTube taken by George’s father, Edmond Khnaisser. 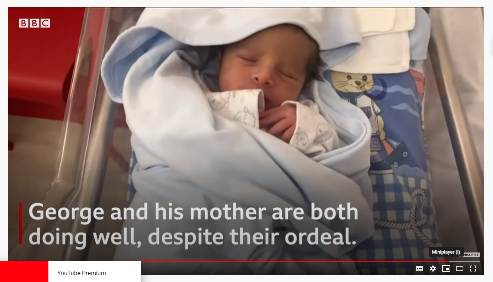 Dr Doumit described how nurses could be seen everywhere, suturing wounds, and taking care of patients on the street, since the ERs and even the corridors were full. “We were flooded with casualties,” she said.

“As Lebanese nurses, we have one characteristic which may not be found in other people,” Dr Doumit explained. “That is resilience. We were born in the war; we’ve been living in a war for 40 years and this has given us lots of resilience.”

On the morning after the explosion, the nurses went to the hospitals and started cleaning the units, assessing the damage, removing all the glass and other broken materials.

“This is something we have lived, we have experienced – obstacles do not stop us,” said Dr Doumit. “But I am not saying they are not experiencing trauma. They may need psychological help. We are living with psychological distress; we are living with a very bad economic situation; and we are also living the stress of the situation, the stress of the unknown, we do not know what to expect.”

When the journalists asked what help was needed in this catastrophe, Dr Doumit explained that the storage unit for the Ministry of Public Health was located at the seaport, where the explosion took place, meaning supplies of medications – especially for non-communicable diseases (NCDs), chemotherapy, and other oncology supplies – had been completely destroyed.

“We need medications for cancer, NCDs, chemotherapy; we lost them all. We don’t have any back up supplies,” she said “We need gloves, PPE, IVs, pads; we need the materials we can use to help people… The Ministry of Public Health supports lots of people, they give medication to many, many people with NCDs, for free, now we have lost all our storage.”

A major vaccination campaign had been planned for September/October, and Dr Doumit feared that the vaccines may also have been stored in the destroyed storage unit at the seaport. “We need a very quick assessment to know what we need in the form of donations,” she said.

Dr Doumit called the Ministry of Public Health on Wednesday morning to urge them to carry out a need’s assessment quickly. She says they now need to publish this so that other countries can know what Beirut really needs.

“We have enough hospital beds,” she explained. “But what we need is help with finances, because what was used in one night is what we used normally in two months. We are lacking sutures, bandages, everything that is used in casualties, we are lacking IVs, needles, syringes. But we are not lacking human resources. We have enough numbers.”

The extent of the health problems resulting from the explosion is unknown. Dr Doumit explained that since the blast threw many people against walls or on the ground, they were expecting many more issues to appear and anticipating complications to fractures, such as internal bleeding, concussions, etc. The further spread of COVID-19 as a result of the disaster could also be a serious issue.

“We have to wait to see what the outbreak of COVID-19 will be,” she said. “But almost 85% of population were wearing a face mask. Healthcare workers managed to get face masks to people even during the catastrophe, so we are hoping not to get a big outbreak after 14 days.”

Dr Doumit praised the amazing work of nurses in Lebanon. “They really deserve the title of hero and I cannot find a word that is bigger than hero to name them. It is our year – it is 2020 – we opened with a pandemic and now we have this catastrophe. I know everything is so bad, but those two things have helped us to show to the whole world what real nursing is…maybe this has helped us to show the meaning of nursing, the meaning of sacrifice, the meaning of resilience, the meaning of being there during war times, during pandemics, during man-made disasters. We are everywhere, wherever you have people you have nurses. We are the backbone of every healthcare system in the whole world.”

“Hospitals without nurses are empty buildings,” she added. “So, we have to maintain and strengthen the nursing workforce and giving them their rights.”

Dr Doumit called on the journalists to ensure the whole world knows what is happening in Lebanon and the importance of supporting the nursing profession.

“I am worried about the nurses who will be without work for months,” she said. “Three hospitals have been demolished. We pray for those who are dead, but we have to think of those who are alive and their families. Baby George was born while others were dying.”

Howard Catton, ICN’s Chief Executive Officer, praised the nurses of Lebanon saying, “When this explosion happened, these nurses physically got up and ran towards – and not away – from the danger at the centre of the disaster. And we see this from nurses in other parts of the world when disasters strike.

‘We talk a lot about the compassion and caring of nurses, but what these tragic incidents highlight is the courage, is the commitment, is the heart…This year, this disaster, this coronavirus, is undoubtedly changing people’s views and attitudes towards nurses.”

“Frankly,” he continued, “we have seen in far too many places a lack of prioritisation and support for nurses and other healthcare workers: problems with personal protective equipment, fake PPE, no supplies, no testing, not the right equipment, low pay, poor pay, and reneging on commitments for pay as well.

‘Many nurses say the applause, the accolades, the recognition, is of course welcome. But if it does not now translate into practical support and investment in the nursing profession and into our health systems, that applause will ring very, very hollow in the ears of all healthcare workers.

‘What we are seeing with this disaster, what we are seeing with COVID, is how intimately linked our health is to every other aspect of life – our economic prosperity, our ability to trade and to see people, our friends and family. We need politicians to come together to support health systems, but to do that in a very practical way through investment and recognise that it is an investment and not a cost. Our nurses, our health workers, are holding our societies, our communities together, making people safe and enabling Baby George and the rest of us to have a future.”

ICN has a disaster fund which is used in tragic times such as this to support national nursing associations in whatever needs they have identified. ICN has called on its member national nursing associations across the world to support this disaster fund and commits to ensuring that the support is based on the needs of the Order of Nurses in Lebanon. It also commits to ensure the support goes to frontline nurses, some of whom are already experiencing hardship, trauma, and the physical and mental health impacts of this tragedy.

“We pledge and commit to stand with you in supporting them, that they are not forgotten,” Mr Catton promised Dr Doumit. “We often talk as though it is the structures and buildings that make up our health systems, but in reality, it is the people: the people who provide care and the people who receive care.”