As the war in Ukraine continues and the death toll of victims rises, the International Council of Nurses (ICN) repeats its call for an immediate ceasefire and an end to hostilities for the sake of the people of Ukraine and peace in our time.

It is apparent from what we see on our television screens and the regular calls we are having with the Ukrainian Nurses Association that the effects of the war are devastating: innocent people are being killed, their families torn apart, homes and hospitals are being destroyed.

The only civilised way forward is a peace accord that will cement a long-term deal and save the lives of countless more innocents who ─ through no fault of their own ─ are caught up in devastation and horror.

ICN’s #NursesforPeace campaign is gaining momentum, and the funds already collected are now being distributed to nurses on the ground in Ukraine via the Ukrainian Nurses Association and the nursing associations of friendly neighbouring countries, including Moldova, Slovakia, Romania and Poland.

In line with our strategy to get money from your donations into the hands of nurses on the front line, we are pleased to report that the funds raised are now reaching nurses in the most challenging situations in the country, and thanks to your generosity, they are making a real difference.

ICN’s #NursesForPeace campaign was set up on 3 March to enable nurses to able to express their solidarity with their colleagues in Ukraine, support our call for an end to hostilities and donate to our Ukraine Humanitarian Fund.

Our online campaign has attracted nearly 3,000 signatories, including organisations representing more than 450,000 nurses and our #NursesforPeace Facebook frame has been used by more than 13,000 people. We have reached more than 100 million people on social media, including 680,000 interactions and 336,000 shares.

ICN President Dr Pamela Cipriano said: “Our campaign has been successful in raising awareness of the plight of nurses in Ukraine, and I have been overwhelmed by the generosity of individual nurses and nursing organisations. We are making sure that the money raised is going to the nurses who need it most. On behalf of nurses everywhere, I want to thank you all for recognising that ICN is at the heart of the global nursing family and for coming to the aid of colleagues in their hour of need.”

Speaking about ICN’s #NursesforPeace campaign and the receipt of funds, President of the Association of Nurses of Ukraine, Tetyana Chernyshenko, said: “The association sincerely thanks the International Council of Nurses, all the nurses of the world, for their great help and support for Ukrainian nurses. It is extremely important for each of us to feel that there are colleagues in this world who are ready to help.

‘Ukraine is at war as a result of a full-scale invasion. There are no words to say what a terrible horror this is, and the entire population of Ukraine suffers. All the Ukrainian people have risen to fight the enemy and are courageously defending the independence and democracy of our country. There have been many atrocities and hundreds of thousands of houses, schools, kindergartens, universities, hospitals, maternity hospitals, railway stations have been destroyed.

‘All medics, doctors and nurses, stand side by side and as one team to provide round-the-clock care to patients in such difficult conditions and under constant shelling by enemy military equipment. Nurses have to work extremely hard, realising that they must be both professionals and psychologists in wartime.” Lyubov Prykhodko, Chair of the Board of the Sumy Regional Organisation of Junior Medical Specialists said: “In such a difficult time for our country, for our nurses, I felt your support, understanding and help. Your support was so timely, so necessary for our nurses to overcome a serious illness, rebuild lost housing, support in the difficult moment of losing loved ones. We bow and thank you sincerely, believing that an outstretched hand in times of suffering will be blessed.”

Nadezhda Shulgina, Chair of Association of Nurses of the Nikolaev area said “In these difficult days for our country we all unite for support of each other, for the help of those who need it, for victory over the enemy, for strengthening and further development of our powerful, and proud and majestic states. The word ‘help’ is the most widely used word in the world today. The other day, we received financial assistance from the International Council of Nurses. Thank you for not leaving us in an anxious and difficult moment. No matter how strong we are, support increases our strength. Your attention and help were invaluable to us - together we are strong.”

Natalia Florina, Chair of the Association of Nurses of the Kharkiv region said: “We express our sincere gratitude to the International Council of Nurses for providing material assistance to nurses of the Kharkiv region who have suffered during the hostilities. We have always believed that the White Heart is an international emblem of nursing, a symbol of mercy, faith and love to help us overcome difficult times of loss and sorrow, and give us hope for victory. Ukrainian nurses provide qualified medical care, save the lives of soldiers and our children, and work with great faith in our victory.”

Speaking after visiting the Poland National Nurses Association in Warsaw this week, ICN Chief Executive Officer Howard Catton said: “As we watch this unfolding tragedy it is overwhelming to see how nurses around the world and others have shown their humanity and generosity in supporting our campaign to help the nurses in Ukraine. I am pleased to see that those funds are now getting into the hands of the nurses who need them most.”

Mr Catton who was in Poland with Paul De Raeve, the General Secretary of the European Federation of Nurses Associations (EFN), thanked the President of the Polish Nurses Association, Grazyna Wojcik, for the tremendous work she and her colleagues were doing to aid the Ukrainian refugees including nurses, as well as for coordinating their visit. ICN and EFN were able to join with representatives of the Polish Nursing Association, university deans, the nursing regulator and senior officials from the Polish Department of Health.

“It was humbling and poignant to see the work that the Polish national nursing association and other individual nurses are doing to support refugees, including Ukrainian nurses, who have made it to safety. We discussed the need for Ukrainian nurses to be able to work in Poland and to progress towards registration in European Union countries through the provision of ‘bridging courses’ that will enable them to meet EU requirements for registered nurses. We are keeping the World Health Organization and the WHO European Region informed about these discussions and any progress made.

‘I visited a refugee centre where 5,000 people, the vast majority women and children, were housed in a converted convention hall. Their basic needs were being met and what struck me was their quiet dignity in the face of such a dramatic upheaval in their lives. Just six weeks ago, these people were going about their normal lives and now they find themselves alone, many of them separated from their partners who are fighting a war, living on a camp bed with little more than the clothes they are wearing. To think that Poland has absorbed more than two million refugees shows the generosity of spirit of the Polish people. There was a small volunteer health team at the refugee centre, which included nurses, who were providing the best care they could in the circumstances.

‘ICN continues in its tradition of bringing the nurses of the world together and we continue to press for the peace we all desire. Because as I have said before, peace and health are inseparable and essential to the achievement of basic human dignity.” 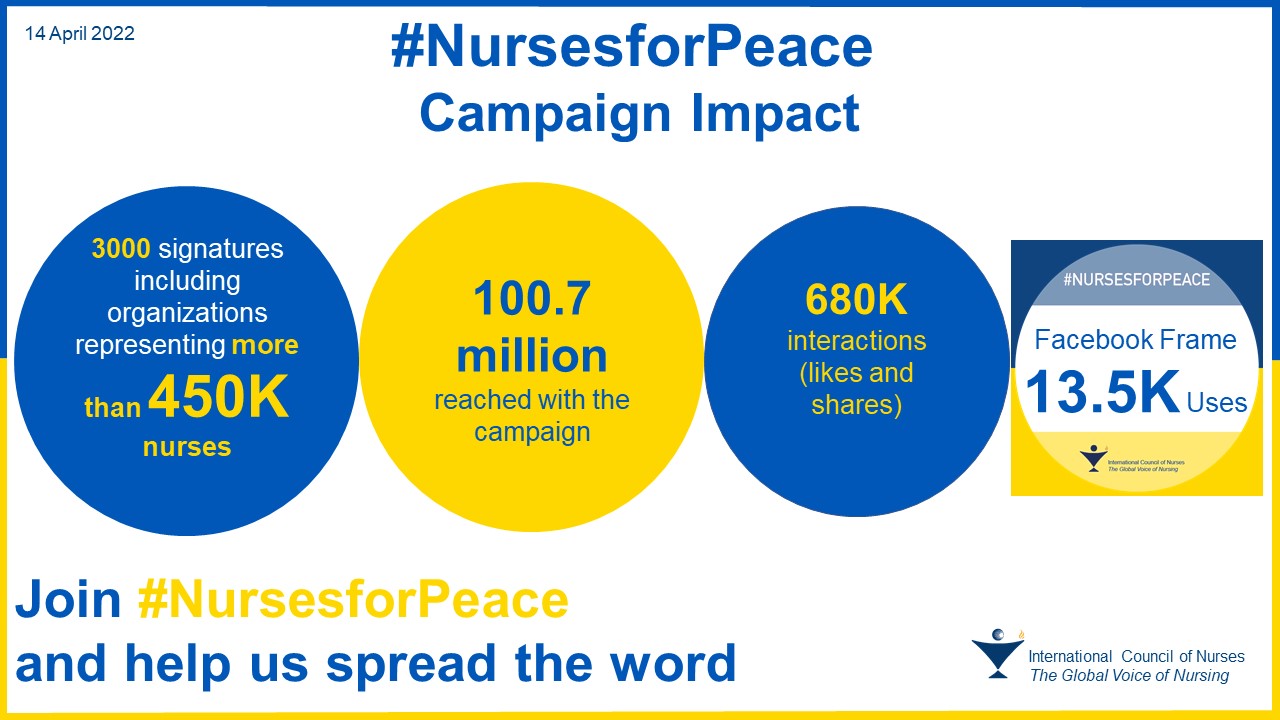 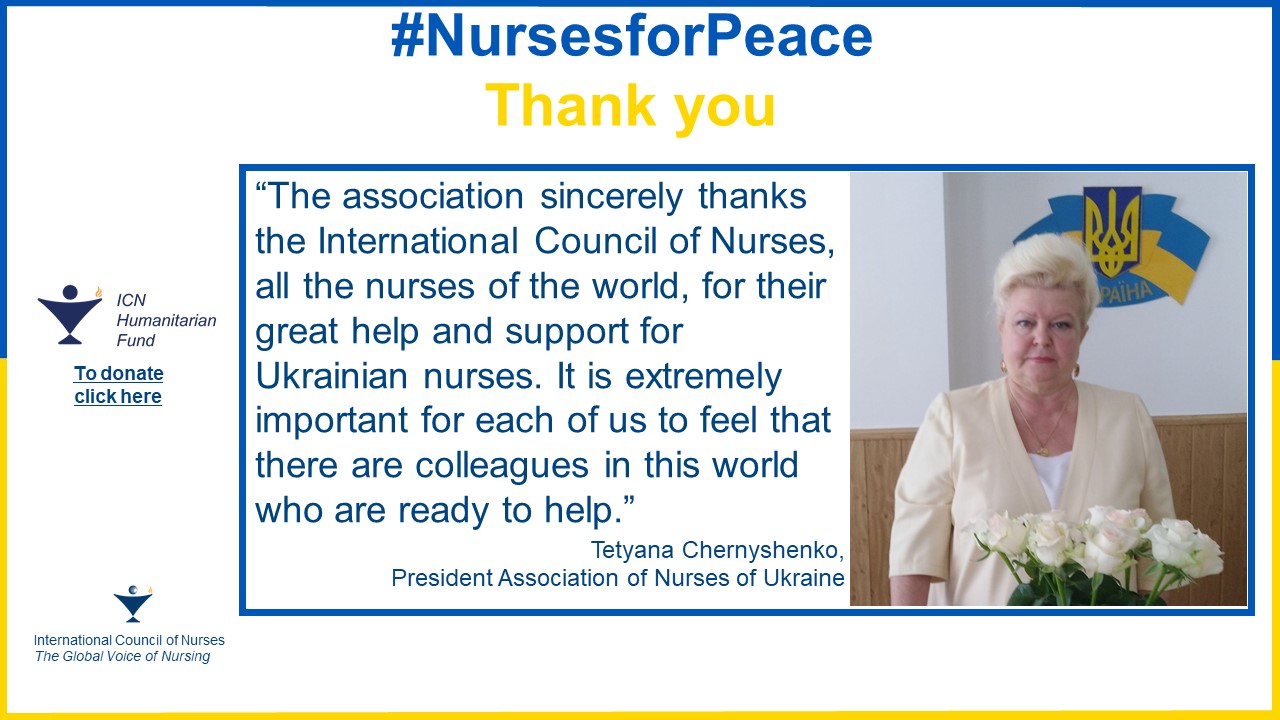 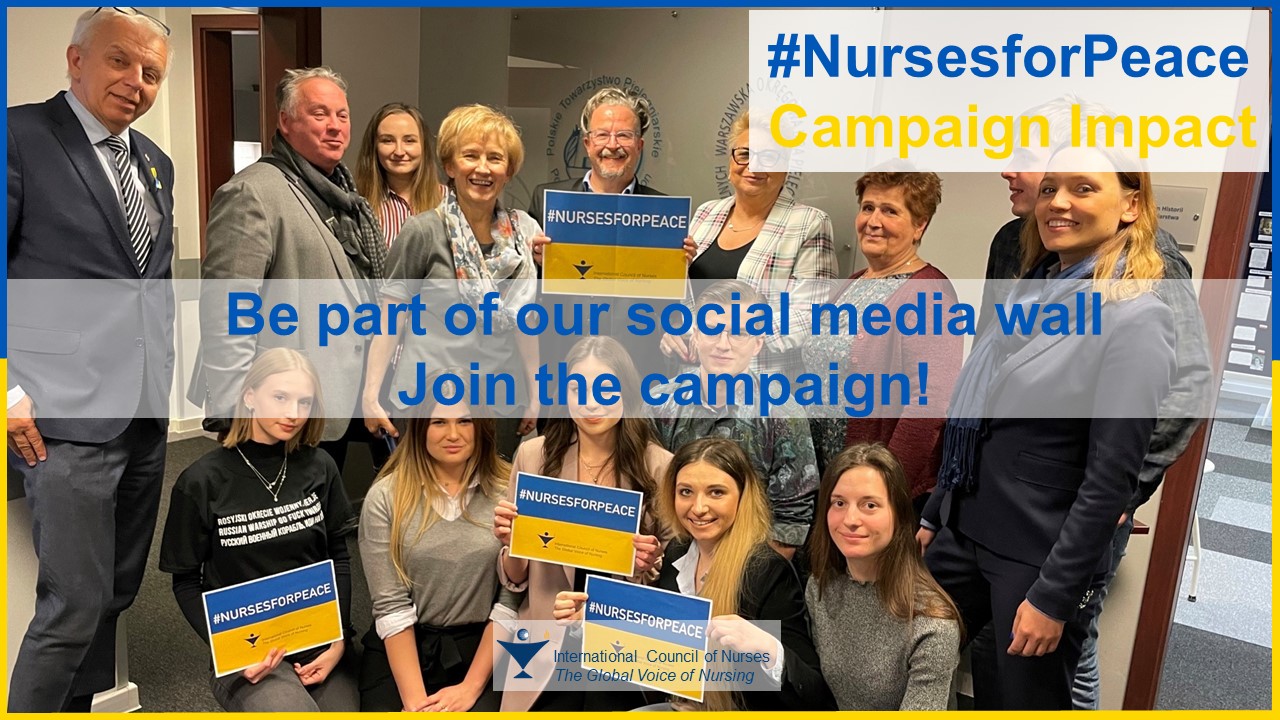 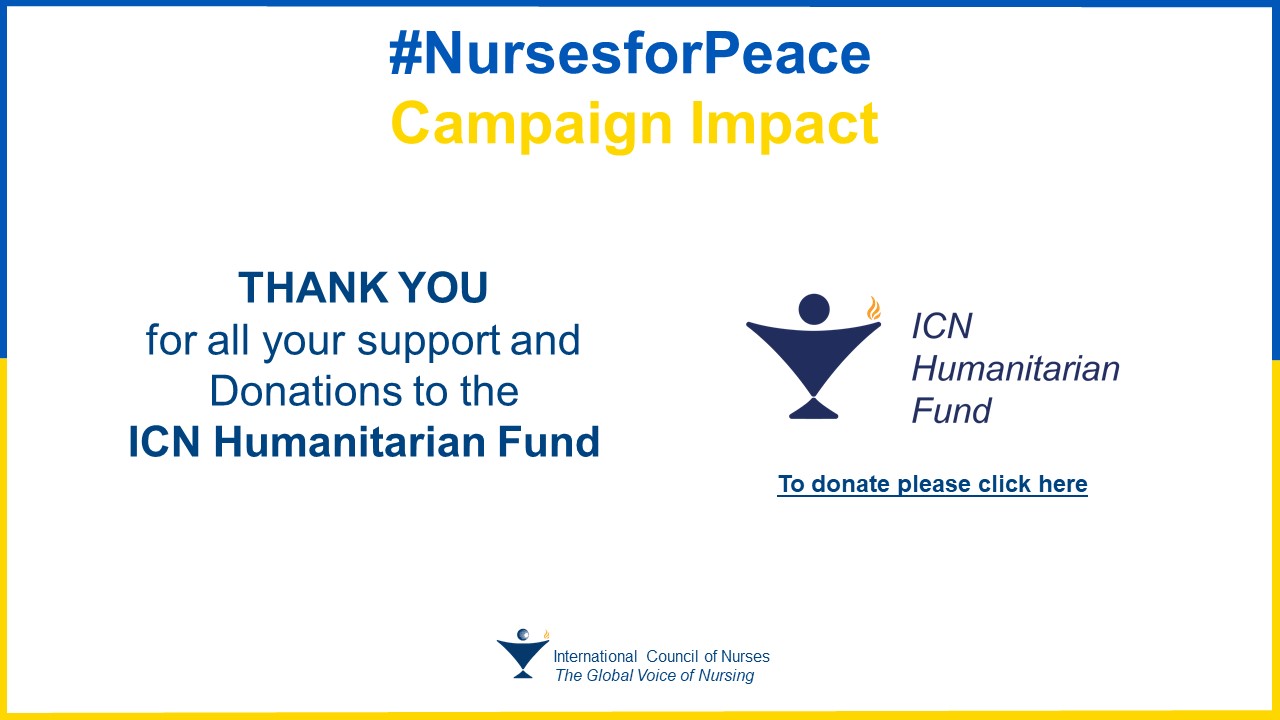