It is now three weeks since the invasion of Ukraine and we have all seen the devastating impact it has had on the people of Ukraine, their nurses and health systems. The invasion has unleashed a terrible toll with more than three million people, mostly women and children, forced to flee their country, and has put world peace at risk.

ICN President Pamela Cipriano said: “We are living in dangerous and frightening times, with the conflict coming during a devastating pandemic that is still very much with us. The world’s nurses are still fighting on the COVID front lines, and our healthcare systems are in a fragile state: the last thing the world needs is a war that threatens the peaceful coexistence that we all treasure. Despite the continued stress and fatigue, nurses everywhere are continuing to do what they can for their patients and communities, and it is inspiring to see them so heavily involved in caring for Ukraine’s refugees, both inside Ukraine and in its neighbouring countries.”

The International Council of Nurses (ICN) launched its #NursesForPeace campaign on 3 March for nurses to be able to express their solidarity, support our call for an end to hostilities and donate to our Ukraine Humanitarian Fund.

There has been a strong reaction in support of the campaign from the global nursing family, showing their solidarity and support by using our campaign images on their social media accounts, and by sending messages to ICN and to the nurses and the people of Ukraine. We would encourage people to keep on doing that, to show that their support is continuing in the days and weeks ahead.

ICN continues to call for ceasefire and our online petition has received almost 2,500 signatures, including from National Nursing Associations (NNAs) and other organisations representing more than 400,000 nurses worldwide. At the beginning of the invasion we called for the protection of healthcare facilities and staff, in line with international law, and we have been shocked and appalled by the attacks we have seen, such as the dreadful bombing of the maternity hospital at Mariupol on 9 March.

ICN wishes to acknowledge the phenomenal support from individual nurses, ICN’s NNAs, and other nursing organisations around the world, many of whom have donated generously to the ICN Humanitarian Fund. Very significant donations have been received from the Taiwan Nurses Association and the Danish Nurses Organisation both of whom have been consistent supporters of ICN programmes and its Humanitarian Fund. Our aim is to make sure that the funds get to nurses on the ground in Ukraine, which we will achieve through our close relationships with trusted partners. ICN has today sent the first donation to the Ukrainian Nurses Association to provide basic necessities for nurses, including food and medical aid.

With donations already received, the ICN Humanitarian Fund stands at CHF 100,000 and a number of substantial pledges are expected to grow that total significantly over the coming days. An organisation making a very generous pledge is the Saskatchewan Union of Nurses (SUN) in Canada, who have a large diaspora of Ukrainians and close connections to the country. The President of SUN, Tracy Zambory said “SUN members have deep, undeniable ties to Ukraine, and so do many of our patients. We feel compelled to do what we can to help our fellow registered nurses, who have vital roles to play in this conflict and in the difficult years ahead.” ICN is also pleased to report that the Spanish Nursing Council (CGE) have opened an account for nursing donations to Ukraine to be sent to the ICN Humanitarian Fund.

In its first two weeks the #NursesForPeace social media campaign has reached almost 100 million people and had nearly 700,000 interactions on social media: our Facebook frame has been adopted by more than 10,000 users.

We have kept in regular contact with nurses in Ukraine, who have told us about the attacks on their facilities and described their desperate need for essential supplies, such as food and clothing, bed linen, personal hygiene products, medicines and medical supplies, including insulin, antibiotics, wound dressings and tourniquets.

We are actively working with the Ukraine Nurses Association to get funds and aid into Ukraine and into the hands of nurses so that this support will have the greatest possible impact on nurses’ wellbeing and patient care.

We are also in close contact with the NNAs in the surrounding countries that are taking in the most refugees, the majority of whom are women and children, including Poland, Moldova, Romania, Hungary and Slovakia. Nurses and their NNAs in those countries are contributing massively to the responses to the unfolding humanitarian crisis by providing care for the refugees’ immediate health needs, and referral on to specialist services for those with long-term conditions.

There are nurses among the refugees who will need specific help so that they are able to work and support their families. We are currently exploring with the neighbouring countries’ NNAs some specific initiatives around this topic as part of the work they are doing for the relief effort. We are doing this in collaboration with our colleagues in the European Federation of Nurses and the European Forum of National Nursing and Midwifery Associations.

ICN Chief Executive Officer Howard Catton said: “We are trying to get our support directly to or as close to nurses and nursing care in Ukraine as we can, and we realise that an immediate response is important. But we will also want to provide support over the coming weeks and months.

‘ICN will continue to call for the immediate cessation of hostilities and will always act to protect and support nurses in danger, ensure safe access to healthcare and endeavour to provide humanitarian relief wherever it is needed.

‘For more than 120 years, ICN has worked for unity among the global nursing workforce, and we will do whatever we can to help to bring about the peace we all so desire, because peace and health are inseparable.” 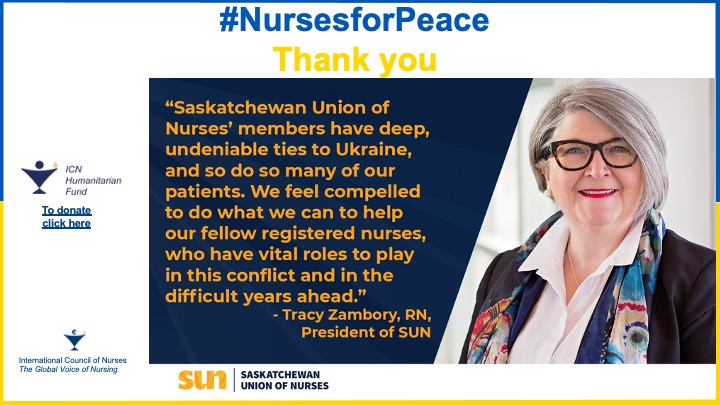 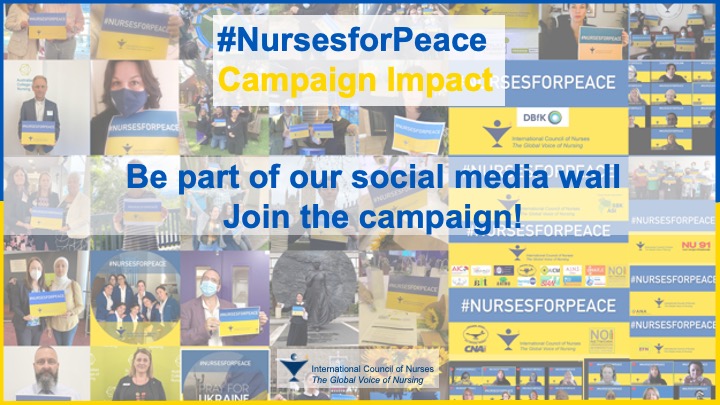 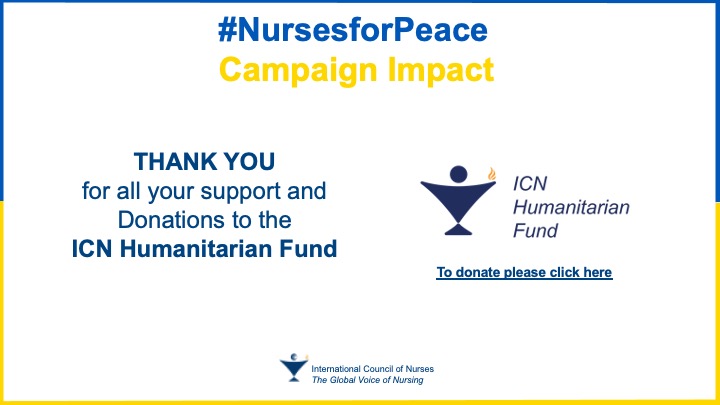